Wow! Ariel Winter, 20, is definitely bidding farewell to her child-star status with her steamy acting gig in the upcoming drama The Last Movie Star! A scene from the film have surfaced showing the stunner rocking fiery red locks and tattoos as she climbs out of bed in a lacy thong — naturally showing off her jaw-dropping booty! In another scene, she apparently takes it all off for a candle-lit bubble bath! So hot!

But the fun doesn’t end there! Before getting out of bed, she has a sexy moment with her hunky tatted-up co-star! She plays Lili McFougal in the project, a wild Nashville local charged with driving an aging film star around (played by none other than Burt Reynolds) as he’s honored at a small film festival. Ariel’s wild look definitely proves she’s ready to take on meatier adult roles!

This new clip arrives just days after Ariel announced to fans that she is going to take a break from college in order to continue working as an actress:

Ariel Winter is taking a break from college.

The 20-year-old actress started studying political science at UCLA last year – after previously deferring for a year – but she is taking time off to “pursue” her acting career.

She said: “I do love UCLA, but at the moment I’m taking a break from it so I can continue to pursue my career and also try to have a little bit more of a life because I’ve been so busy.”

“That’s really it at the moment. But I think education’s really important. I love being there. I love learning. I will continue to keep learning and I just wanted to take a break to focus on myself and square some things with myself.”

Ariel – who portrays Alex Dunphy in the comedy series – is hoping to broaden her horizons by appearing in further films.

She said: “I would hope to do more movies. Really anything that comes my way that speaks to me or feels rights, something, a new character I haven’t done before. I’m pretty open. I like doing different things. I like trying things, so for me, it’s really whatever happens.”

Ariel Winter Taught Burt Reynolds How to Take a Selfie:

Ariel Winter and boyfriend Levi Meaden have been dating for more than a year and appear stronger than ever.

ET spoke with Meaden at the Pacific Rim: Uprising premiere in Los Angeles on Wednesday, where he talked about his new sci-fi film as well as his relationship with Winter. The two live together, and Meaden says “nothing” has changed when it comes to their dynamic.

“Less fear, I guess. That’s the only thing,” he tells ET’s Courtney Tezeno. “We’re happier than ever. We’ve got three dogs, we adopted a bunny, there might be another one on the way. I guess, more animals. That’s what’s changed. There was two dogs to begin with, now we got another dog and a rabbit. So, in a year maybe, I don’t know, a whole farm?”

Meaden, 30, even had a hard time coming up with a pet peeve when it comes to 20-year-old Winter.

“I mean, the pet peeves I kinda love,” he explains. “She doesn’t really know movies, which is amazing, because she’s been in movies for so long, but she doesn’t — she never watched them! So, it’s not really a pet peeve as much as it’s something I really enjoy, because I get to show her all these old films. Probably a pet peeve of hers, because then I go into all the trivia and explain the history of the movie until she’s like, ‘Shut up, Levi!'”

Winter, looking stunning in a striking red dress and heels, attended the premiere to support her beau. Meaden, who said Winter visited him in Australia and China while shooting the film, explained the meaningful tattoos they have for one another. The actor showed off the ink on his finger of a jar reading “PB,” which stands for peanut butter, his nickname for Winter.

“Well, I’m not sure how it came about, but she has ‘Cheese’ on her finger and she says, ‘It’s a messed-up sandwich that works,'” Meaden shares. “Peanut butter and cheese! Now, everyone thinks it doesn’t, but if you try it — depending on the cheese — it’s really good.” 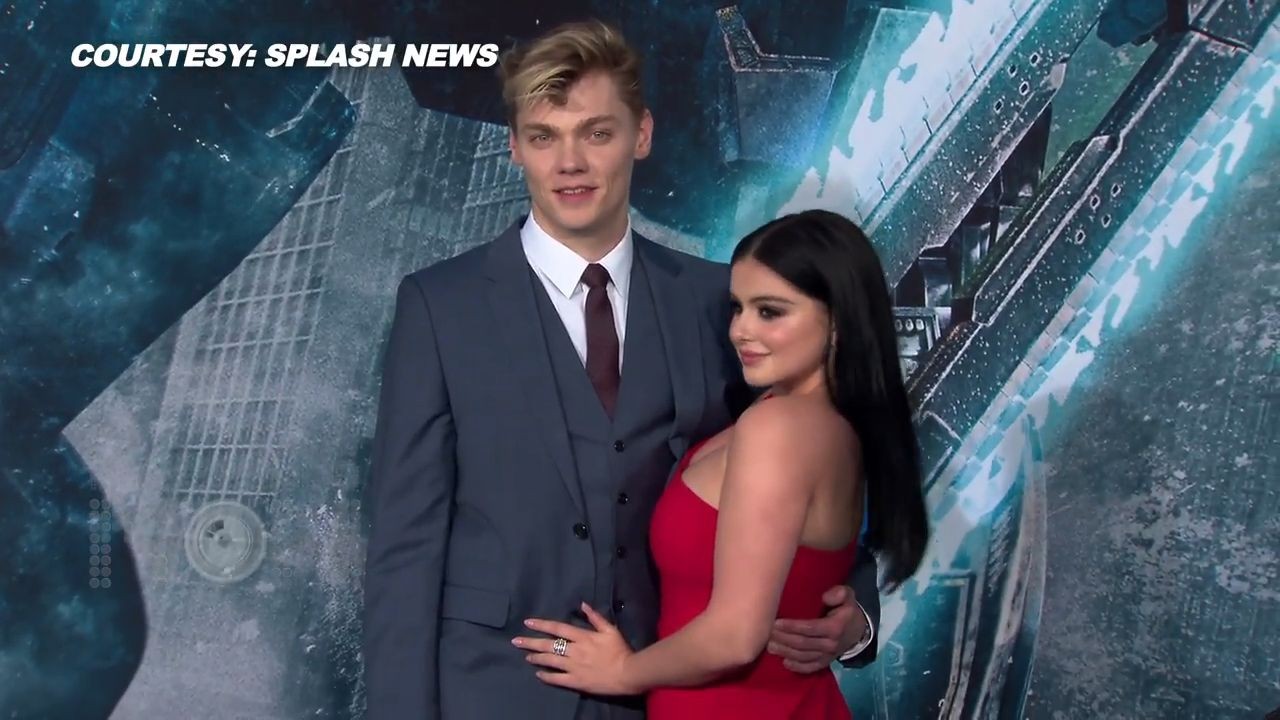